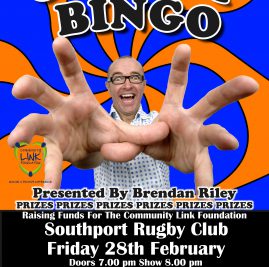 Eyes down for Comedy Bingo night!

A local sports club will be ringing with shouts of ‘Bingo’ when Community Link Foundation hosts its next event.

The event will be hosted by comedian, Brendan Riley to raise money for the charity. The event is for all ages to attend and will be very family friendly.

The Waterloo Road venue will open its doors at 7pm with the event starting at 8pm.

Enda Rylands, chairman of Community Link Foundation, said: “We are really looking forward to this event as we know how much fun it will be. Brendan has supported CLF for years choosing us as the charity to benefit from the comedy workshops which are part of the Southport Comedy Festival. We know he will put on a brilliant, fun night and it is the chance for families to come out together and enjoy a night out, while raising money that can be used in the local community.”

Brendan Riley said: “Comedy Bingo has been an amazing event for charities and schools alike. I have raised thousands of pounds over the last five years so it’s brilliant that I am working with Community Link Foundation to raise funds for them.

“I feel really close to Community Link Foundation as I have seen the impact that the charity has had on so many people in our community. We will have a fantastic fun filled night and I am really looking forward to it.”

Tickets are Â£10 for adults and under 16s are £3, which includes the bingo tickets. Tickets are available from Southport Rugby Club Bar or call Enda Rylands on 07913253872.